I’m very happy to present another horror and dark fiction author this week. There are a few more in the pipeline and I’m slightly disturbed by how ‘nice’ they all seem to be. (I’m not sure the authors will thank me for ‘outing’ them like this. It also makes me wonder what Romance writers are like when they’re not writing…)

This is a great interview – understated, concise, and refreshingly humble. I’m not going to spin out the intro any further, other than to say I’ve bought a copy of one of the author’s books and crowbarred it into the top of my to-be-read list.

I’m a bit biased on this question because it’s one of my favorite books. I think everyone should read Mary Shelley’s Frankenstein. Not only has it stood the test of time, but the book also seems rather relevant to present day, where we are growing ears on the backs of mice and cloning. For me, the likelihood of reanimating a human corpse, either a whole person or chop-shopped, is high. How might those creations react upon breathing their first breath?

Soon, we may have colonies on Mars, so marooned is becoming more and more unlikely. That being the case, colonization could take a couple of lifetimes, and those first settlers might find themselves with a lot of down time. A spacey theme feels like a good choice, and since I loved the book as a teenager, I think The Hitchhiker’s Guide to The Galaxy is a good fit.

Before I knew Joe Hill’s lineage, my wife picked up Heart-Shaped Box as a gift for me. Currently, that book is still one of my favorites. I know some may disagree, but there’s nothing quite like a good ghost story, and that one hit a lot of really good notes for me. 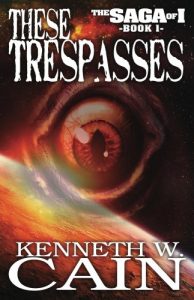 I’d like to go with my latest, Embers. With each new story, I’m growing as a writer, and that’s a path with which I’d really like to stay on track. This collection of short stories was a big leap for me craft wise. But my favorite work is currently unsold. It’s a novelette entitled “A Season In Hell” about a woman playing baseball in the minor leagues in the early nineties and her struggles. It’s more literary, but there’s a certain darkness to it. If you’re looking for a book that’s already out there, I got really attached with the characters in my first book, These Trespasses, from The Saga of I trilogy. Someday, I may revisit that series and try to make more of it now that I’ve honed my skills some.

There are many writers who’ve personally influenced me via direct contact, but book wise, I’d have to say Nathaniel Hawthorne’s Mosses from an Old Manse. It’s where I first read “Young Goodman Brown” and fell in love with telling darker stories. Something about that story stuck with me all these years, and so I’ve often found myself reflecting on the unknown, and speculating what’s out there.

For me, it’s a short story actually; Ken Liu’s entitled “The Paper Menagerie.” I forget where it originally appeared, but it’s been reprinted several times. There’s even audio out there (linked on his website I believe). For me, that story reached heights I’ve often dreamed of. To have everything come together so well, that’s the sort of writing I strive for. Reading that story made me take a second look at my short career, and that’s when I decided I needed to really kick things up a notch. It unlocked something for me, a better sense of what I needed to achieve in a story. 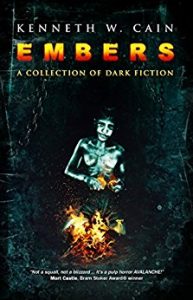 Definitely Embers. It’s by far my strongest work; the cleanest and best storytelling I’ve achieved thus far. It’s a big step up for me, and I think a lot of readers will get a good sense of where I’m going with my writing by taking a chance on this collection of short fiction.

You can find Kenneth at: www.kennethwcain.com 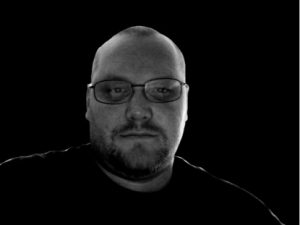 Kenneth W. Cain is the author of the Saga of I trilogy, United States of the Dead, the short story collections These Old Tales and Fresh Cut Tales, and his latest Embers: A Collection of Dark Fiction. Early on, shows like The Twilight Zone, The Outer Limits, Alfred Hitchcock Presents, and One Step Beyond created a sense of wonder for the unknown that continues to fuel his writing.  Cain resides in Chester County, Pennsylvania with his wife and two children.