For those of you here for the free book, the books are no longer free. That was a limited offer. However, you can check them out here:

The original cover was this: 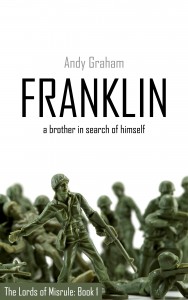 The idea of using the toy soldiers came from a similar image (which I can’t show you because of copyright reasons). It was more uniform, more rigid, and darker than this green plastic one. I use the word ‘darker’ lightly (no pun intended); the word is thrown around a lot these days. I hope it doesn’t go the way of ‘urban’, ‘gritty’ or ‘holistic’.

The previous image (which I still can’t show you), was great. Unfortunately, there were issues over using it, so I had to let it go (that link’s for my daughter. Give it a listen, though, it’s kind of cool #dadjoke). Once I realised the cover was a non-starter, my designer and I looked for similar images and came up with the green plastic soldier one you can see above.

The font reminds me of political propaganda posters; political skullduggery (an oxymoron?) is a theme in the book. I like the expression of the central figure. Most important, though, is the fact that he is a toy soldier (read the book – you’ll see why it works).

However, a few people commented that the image was too WW2 for the genre.

It’s a great picture, but it doesn’t really scream dystopian/ sci fi/ political/ suspense at you. It doesn’t fit the genre, and people do, absolutely, judge a book by the cover (especially for unknown authors trying to get noticed – hint hint #pleasereaditandleaveareviewifyouhaven’talreadydoneso).

After several false starts we came up with this cover. 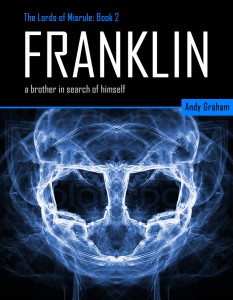 It suits the genre.

When you couple it with the images for the rest of the books, you have a great set of covers (see my FB and twitter headers for the images).

The moral of the story is yet another lesson in the bleeding obvious: you can’t edit your own work, and unless you have a visual eye to go with your literary one, you can’t design your own cover. I was too vested in the original idea to look beyond it, and am grateful for the honest feedback of those who gave it.

Since republishing and (partially) rebranding the book, I have decided to make book one book two and the prequel book one (more of that in another blog post).

So, join me again soon, as I continue my tumble through an avalanche of foreseeable self-publishing errors and continue to republish book one (or is it two) under a variety of pen names and aliases. I’m thinking of renaming  the book ‘storms of summer’ or ‘augers of autumn’ or maybe ‘winds of winter’. It maybe too grim, but unless someone famous has used one of those titles, it could work . . .

Here are those links for the book again