I said that I had more book reviews in the pipeline, and here’s the next – Mark Cassell’s novella Hell Cat of the Holt.

Let’s get the disclaimers out of the way:

1 – I received a free copy of the book. Since finishing it, I’ve bought a copy. (As I’ve mentioned before, we need to support the arts – musicians, authors, artists and so on. If you don’t, they won’t be many of us left before long.)

2 – Confessions of a Reviewer who are organising this for Mark are also organising a promo tour for my latest book.

3 – I am a ‘friend’ of Mark on social media, despite having never met or spoken to him. (Odd how this is now ‘normal’.)

None of those have influenced my review and what follows is an honest opinion. 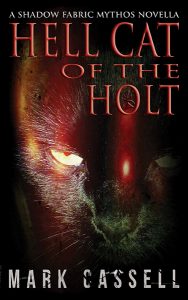 Shy accountant Anne returns to the village of Mabley Holt to piece together her life after a family tragedy. When her cat vanishes, and a neighbour claims to speak with his dead wife, she soon learns there’s more to the village than any resident dares admit. In search of her beloved pet, she discovers not only family secrets but also revelations of a local legend.

The novella actually struck me as two stories in one. The first part of the book is able to stand alone as a short story. This section really stood out for me. It’s tight and punchy and has a great twist. The beauty of the twist was that I knew something was coming, but didn’t spot it until it hit. When I reread it, I could see the hints that led up to the climax.

The rest of the novella builds on this back story. It’s fast-paced and creepy. It’s got demons, supernatural beasts, blood, gore, guts and enough unsettling sections for most readers interested in dark fiction/ horror. The characters are believable. The plot’s well thought out and has some unexpected turns that keep it interesting.

I like the way the author weaves in characters and cameos from the rest of his work. I appreciate this style of writing isn’t to everyone’s tastes, but I enjoy spotting the references and connections. It’s cleverly done and not obtrusive.

Downsides? It gets a little too descriptive in places, in particular towards the end. I’d have preferred sparser prose and maybe a little more dialogue to keep the pace quicker as the story builds to its conclusion. (As much of a conclusion as you get in an ever-expanding world of stories.)

The more of the stories you’ve read in the author’s Shadow Fabric Mythos, the more you’ll get out of this novella. That being said, this book works perfectly well as a stand alone novella and serves as a good introduction to his work. Plus, you also get a bonus short story at the end that provides further background to the Hell Cat story.

if you’re interested in reading the words behind the words, i.e. what Mark reads when he’s not writing, you can check out his interview below.