This is great – funny, informative, quirky, and honest. A huge thanks to this week’s author for one of my favourite interviews so far.

Oh man, you could have started off with an easy question, couldn’t you?

I would have to say To Kill a Mockingbird by Harper Lee. It’s a wonderful book, full of love and compassion and tolerance as well as being a first rate read. This is a book I reread from time to time, but I try not to read it too often. I don’t ever want to become too familiar with it.

Well, I suppose the easy answer to that one would be The Martian by Andy Weir, as I would then have an instruction manual on how to survive on Mars!

Or, the other answer would be: Can I take my Kindle, because then I can have lots of books, which would be my ideal choice. I’m guessing a Kindle doesn’t count as a book though, does it?

Then again, maybe I should take the longest book ever written so I would be kept busy reading that for a good long while.

As you can see, I don’t have a sensible answer for you. If really pushed into answering this question I would look to a book that I have already read more than once and still enjoyed. So that would be To Kill a Mockingbird, by Harper Lee. Or maybe Misery, by Stephen King.

Both of these books are rich and layered and, even if I don’t get marooned on Mars, I will probably read both of them at least one more time.

To be honest I tend to be disappointed more than pleasantly surprised by books these days, which is a shame. I think the last book I enjoyed which I hadn’t thought I would (it was pressed fervently onto me by a book loving friend) was The Unlikely Pilgrimage of Harold Fry by Rachel Joyce. Not particularly my kind of read, but I was drawn in and moved by its descriptions of ordinary, everyday love, and one man’s determination to do something with his life, even if it was just to deliver a letter. 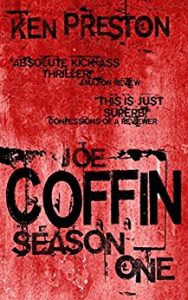 To be honest, I love all my books, even the ones I never finished writing, and the ones I did finish writing but will never be published because I can’t face inflicting them upon the world at large.

But if I had to pick ONE, I guess it would be Joe Coffin Season One. I published Season Three earlier this year and I will be starting work on Season Four soon, but I think number one will always be my favourite as it now feels like the start of a great adventure.

Season One also feels like the point where I got serious about writing and publishing. I had self-published a few books before this, and had a couple traditionally published too. But Joe Coffin Season One feels like the starting point.

A mashup of crime and vampire horror, I wrote Joe Coffin in ‘Seasons’ to resemble a TV series. It’s fast paced, violent, gruesome, funny and filled with cliff hangers. Just like the TV shows I like to watch.

When I started work on the first of the Joe Coffin books I was writing it for myself really. But that big, ugly, mob enforcer turned vampire hunter seems to have caught the imagination of lots of people, and women in particular have fallen for him big time, which came as a surprise to me.

Joe Coffin sprang from a very dark place in my life, working as a sort of therapy for a while. There’s a lot to be said for writing as therapy!

Now this is going to sound weird, but a book I have owned for years and have looked through many times and, yes, has probably influenced me more than any other (even the Bible which had a powerful grip on me during the years I called myself a Christian and regularly attended church) is this one: Walker Evans: Photographs for the Farm Security Administration 1935-1938.

Basically it’s a collection of photographs taken by American photographer Walker Evans who was hired by the government to document the lives of share croppers in Alabama. And that’s it.

But it is stunning in its stark, black and white simplicity, and more than thirty years after I bought it I still find myself returning from time to time to gaze at the photographs of poor dirt farmers who will now be long dead but have lived on in my imagination.

This book could also be filed under personal, but I will answer it here as it is probably the one that finally enabled me to pick myself up off the floor and get on with the business of carving a career out of my love of writing. For many years I resisted reading Susan Jeffers’ book Feel the Fear and Do It Anyway, but after a spell of crippling depression I gave in and picked it up.

And it’s a revelation.

If you have long harboured a dream but are too scared to follow it, I strongly recommend this book. I don’t agree with every word, but then I don’t have to. It’s the message that counts. And the message at its most simple is this: Go ahead and live your life.

Joe Coffin Season One! Definitely. And you don’t have to take my word for it, as you can try it for free on Amazon.

You can find Ken at: www.kenpreston.co.uk 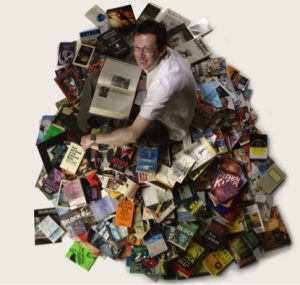 Ken Preston is the author of the Joe Coffin series of books, YA adventure series Planet of the Dinosaurs, and the Romance and Adventure line.

He writes in his cellar, on the street where Jack the Ripper was born, and lives with his wife, two boys, and two cats. The cats often contribute to his books by walking across his keyboard.

Join his growing list of VIP readers and get two free books within your first week of membership. That’s right, you will get JOE COFFIN SEASON ONE, all of it, with your first email. that’s over 400 pages of British noir and vampire mayhem for free, and then Population:DEAD!, a collection of bizarre and twisted stories including How to Eat a Car, and The Man Who Murdered Himself.