Hot on the heels of last week’s 18th birthday celebration, the One Book Interview is back to business as usual. Today, I’m very happy to be taking part in a book tour for an exciting author by the name of Jason Parent. His new book  A Life Removed

is out now. I had the pleasure of reading an advance copy not so long ago. You can find out what I thought of it tomorrow, but for now, here is a taste of what Jason likes to read when he’s not writing. (Interestingly, three of his choices made the top twelve list in last week’s 18th birthday book summary.)

The Stand, by Stephen King – It is a genre-defining tale of good versus evil that should be required reading.

The Martian, by Andy Weir – I’d need some chance of being able to grow potatoes. Of course, I’d probably also need potatoes.

Robert McCammon’s Matthew Corbett series. Historical fiction, not quite horror or my usual cup of tea, but altogether perfect.

My books vary so much in genre and tone that my answer to this question changes daily. But so as not to cop out, I think Wrathbone and Other Stories

is one of my best works.

Tucker Max’s I Hope They Serve Beer in Hell. The book never answers the question whether beer is, in fact, served in Hell, so I have made it a life-long ambition to drink as much beer as possible before I get there. I’m guessing it’s all mimosas and umbrella drinks down under the earth.

Not Tucker Max’s books. Stephen King’s On Writing has made me re-examine my craft.

That depends on how dark they want to go. I have a couple of novellas priced at $0.99 to allow potential readers to give me a try. But my novels are all stand-alones, so my latest, A Life Removed

is as good a start as any (and happens to be set earliest chronologically).

You can find Jason at: www.authorjasonparent.com 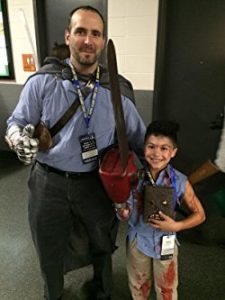 In his head, Jason Parent lives in many places, but in the real world, he calls New England his home. The region offers an abundance of settings for his writing and many wonderful places in which to write them. He currently resides in Southeastern Massachusetts with his cuddly corgi named Calypso.

In a prior life, Jason spent most of his time in front of a judge . . . as a civil litigator. When he finally tired of Latin phrases no one knew how to pronounce and explaining to people that real lawsuits are not started, tried and finalized within the 60-minute timeframe they see on TV (it’s harassing the witness; no one throws vicious woodland creatures at them), he traded in his cheap suits for flip flops and designer stubble. The flops got repossessed the next day, and he’s back in the legal field . . . sorta. But that’s another story.

When he’s not working, Jason likes to kayak, catch a movie, travel any place that will let him enter, and play just about any sport (except that ball tied to the pole thing where you basically just whack the ball until it twists in a knot or takes somebody’s head off – he misses the appeal). And read and write, of course. He does that too sometimes.