The heart of a story is its characters, and this week’s author has met any number of people to fuel his fiction. In his own words:

“I’ve met interesting and powerful people: the Prime Minister (UK), the Chancellor, Boris. I’ve listened to the stories of dying kids, drag queen wrestlers, reformed addicts, artists, writers, bishops and liars. I’ve sat in courtrooms, council chambers and inquests. I’ve seen so many different sides of so many different people, their passions, their schemes, their pettiness and selflessness. It has been an education in the human condition. A rich and vivid mosaic of stories: all valid, all unique, all fantastic in their own way. “

Just give me a moment.

I usually keep links in these interviews to a minimum. I also don’t talk about myself. The idea is, after all, that we’re here to talk about this weeks author and their book choices. But, as I was nosing around Author #24’s website, I found this: The Ray Bradbury Challenge. I’ve been toying with a similar idea but up until now didn’t know it was a ‘thing’. Author #24 is documenting his progress, so if you’re interested in how it’s working, you can find out at his website. (Which is beautifully designed by the way – as are the book covers. I guess a PhD in the History of Art has benefits.)

And here we are – the questions.

Good people of the Internet, writing out of Morecombe in the North West of England – Jon Cronshaw.

Art Spiegelman’s Maus. It’s the story of a Polish Jew living through the holocaust told using cartoon cats and mice. It’s brilliant, heart-wrenching, and brutal. It teaches us about hope and loss, about how to keep hold of humanity in the face of inhumanity. Maus is an uncomfortable read at points, but we owe it to history to try to understand so they are never repeated.

I’m sure Andy Wier’s The Martian would prove quite useful, but it would have to be Gene Wolfe’s Book of the New Sun. It’s a deep, layered story that rewards re-reading. If I’m going to be on Mars for a while, it would certainly give me something to puzzle over.

Flatland by Edwin Abbott Abbott is utterly insane and includes characters such as squares, hexagons and straight lines. It’s probably one of the most surreal things to come out of the 19th century – part satire, part geometry – it’s fantastic.

I really enjoyed writing Knight of the Wasteland

. The first draft was written in a flurry of energy that I hope will pull readers through to the end. Through the bleakness and brutality of the wasteland, there’s a real sense of hope and friendship that early readers have loved.

Brave New World. I read the story when I was about thirteen and was blown away. We’d read Orwell’s 1984 and E. M. Forster’s short story The Machine Stops in English at school and asked my teacher if there was anything else like these stories. It’s definitely those stories that are at the roots for my love of science fiction. I also read like J. D. Salinger’s The Catcher in the Rye, Luke Rhinehart’s The Dice Man, Iain Banks’s The Wasp Factory, and Anthony Burgess’s A Clockwork Orange when I was sixteen that have stuck with me, lodged in some deep part of my brain.

It was reading William Gibson’s Neuromancer that made me want to become an author – I’d read nothing like it and it made me realise it was okay to tell the kinds of stories that were rattling around my brain.

Then there are also the books on the nuts and bolts of writing and storytelling. I’ve actually found works on screenwriting more useful than those about writing novels – perhaps it’s the focus on the use of dialogue and setting to propel a story that I find so appealing. Robert McKee’s Story and Blake Snyder’s Save the Cat! have been indispensable. In terms of the craft of writing, Sol Stein’s On Writing is the one I keep finding myself revisiting.

My first novel Wizard of the Wasteland

is available on Amazon as an ebook or paperback. It’s a post-apocalyptic novel about a recovering drug addict and his dog struggling to survive in an unforgiving world.

You can find Jon at: www.joncronshaw.com 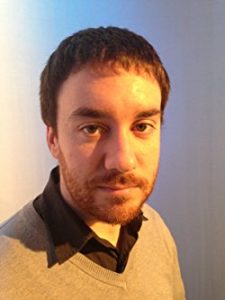 Jon Cronshaw is a British science fiction and fantasy author based in Morecambe, England.

As a freelance features writer, he has had work published in local and national newspapers across the UK, including the Metro, Yorkshire Post and the Guardian.

He earned his PhD in the history of art from the University of Leeds in 2011, focusing on the life and work of Anglo-American sculptor, Jacob Epstein (1880-1959).