This week’s author is a man after my own heart – mixing genres such as horror, dystopian, dark fantasy and adventure. A man who believes that:

‘character is king and there should always be little seeds planted between lines, that the reader will only discover in subsequent readings’.

Except for the vampires. He has vampires in his stories.

(And a pet dragon at home.)

Good people of the Internet, writing out of Lancaster, Massachusetts – Steve Van Samson.

The Shining by Stephen King. I think it might be fair to say that at this point, more people are familiar with the film, than the novel. Even though both stand as legitimately fascinating characters, it’s a little shocking how little book-Jack has in common with movie-Jack. In fact, King’s Torrances are written so intricately, so staggeringly human, we are left with no recourse other than to fall madly in love with them. That’s why I believe that all fans of Kubrick’s “The Shining”, owe it to themselves to check out the original novel.

Mars is a hike–why take just one story? The Horror Stories of Robert E. Howard is literally my favorite compilation, ever. The tales range from werewolves, to sea curses, to explorations of Howard’s bottomless interest in the ancestral roots of men. Included are some of Howard’s best works including two of my favorites: Pigeons From Hell, and Worms of the Earth. Though the writer is best remembered for creating Conan the Barbarian (and with him, that sub-division of the fantasy genre known as “Sword and Sorcery”), this collection reveals at least one more genre we can thank him for, “The Weird Western”. What’s more, the book also features numerous stunning black and white illustrations by Judge Dredd artist Greg Staples, as well as a fascinating introduction by editor Rusty Burke. That should keep me busy on Mars for a while, I reckon.

The Ocean At The End Of The Lane by Neil Gaiman. First let me state that Gaiman is (skill and style wise) probably my favorite writer of all time. His prose is so expertly crafted, so brimming with restrained wit–as I read, I constantly feel like I’m being winked at. That said, I do not necessarily adore every single thing the man does. As it happened, my wife had urged me to read TOATEOTL for a while, almost a year. And truthfully, I don’t know what my problem was. I think the title evoked something that didn’t interest me. Maybe I thought it was going to be too childish, or a sap-fest. Not sure anymore. Long story short–when I finally read the thing, I found myself immediately whisked away on a magical coming of age story unlike any other. By the end, my butt was sore from all the kicking I did (you know, for not reading the darn thing sooner).

I’m still pretty knew at this whole being published thing, so I’ll choose the last book I finished (which will be released this fall). The book is called Marrow Dust and it is the second in my Predator World series. As with its predecessor, Marrow Dust is set in Africa and deals with the business of survival, some decades after a vampire apocalypse. I had never written a sequel before and crafting a story that felt not only worthy of telling but necessary, wasn’t easy. I’m definitely proud as heck of the thing, and of my tough as nails, female protagonist, Mirèlha Nanji.

Oh boy–this is a tough one since I generally read fluff and nonsense. The hell with it, why fight the tide? Shadows of the Empire by Steve Perry. That one holds a very special place in my heart. When I was a tot, my mother instilled in me, a great love of books. We read nearly every night, just as I now read to my own daughter. That said, as time went on, books were replaced by Nintendo and then the far more majestic Super Nintendo–and though it pains me to admit it, at the age of 17, I had never read a novel I wasn’t “forced to, for school”. Fortunately, that all changed with Shadows of the Empire. It was the one book, I couldn’t not read. Billed as the lost Star Wars film, the story fit between Empire and Jedi. And if that wasn’t enough, the novel was only one part of a three pronged Lucasfilm multimedia assault! Prongs two and three were a series of comic books, and a video game for the N64, respectively. All bore the title of Shadows of the Empire and I had to have them. All of them. What was so great about this marketing strategy was this–you couldn’t get the whole story without consuming all of the separate media. The stories were not redundant adaptations of one another, but rather separate tales that intertwined into one massive whole. There were plenty of familiar faces to get excited about, but also new ones like Han Solo’s slightly scruffier pal, Dash Rendar. Best of all though was the villain of the piece, Prince Xixor of the Black Sun crime organization. An evil man, by all accounts, but one who reserved his true hatred for one, Darth Vader. Despite being only 385 pages, this book proved that reading a novel for pleasure was something I was capable of–and as silly as it sounds, when I finished, I was pretty stinking proud of myself.

Hands down, the A Song of Ice and Fire series by George R. R. Martin. Reading these books taught me so much about the sort of writer I wanted to be. They proved that the relationship between reader and writer is a tenuous thing. That sometimes, to be a really great writer, one must first become a tyrant. Manipulating not only their characters, but the hearts of those who read. I definitely don’t agree with everything Martin does (there really is only so much chin grease one logically needs to describe), but he has a way of playing his audience like few others can. Beyond the merits of an unexpected death, he has also shown me the value in creating a character that we will have no choice but to despise… only to then spend the next two books turning our hearts on the subject. When done properly, it’s a heck of a thing.

is my first published novel. The book was inspired by the Robert E. Howard story The Hills Of The Dead which featuring Howard’s famed monster fighting puritan, Solomon Kane. As with THOTD, I decided to set my vampire story in Africa–far away from the typical settings of some modern city or Victorian Europe. With The Bone Eater King

I strove to create a pulpy and thoroughly unique adventure tale with horror elements, told from the perspective of an amnesiac. Someone who begins the story in the middle of a pitch dark savanna, unsure who he is or what the dozens of sinister eyes which now surround him, belong to. The book will be released for Kindle on Aug. 21st and then in paperback on Sept. 25th.

You can find Steve at: www.shatteredscribblings.com 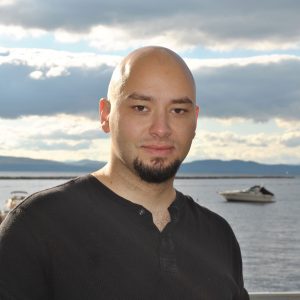 Author of the forthcoming pulpy horror/adventure books “The Bone Eater King” and its sequel “Marrow Dust”, Steve is an artist, graphic designer and dad by trade, but also a part time pod-caster, wannabe rock star and a great lover of all things GEEK.