Lies my Teacher Told Me by James W. Loewen. I know, probably an odd suggestion from a fantasy writer. You thought I’d say Tolkien or something. But I love this book and have suggested it to many people. It opened my eyes to the misperceptions that are pervasive in our society and schools that are completely false. It taught me to question everything and that is a skill I wish we were teaching in school. But it is never too late. So go read this book. It will change your perception of our world and what you think you know, especially if you learned it in school.

Now this is a tough choice between something practical like a book on growing plants in harsh conditions or Solar power for Dummies or just a book to feed my brain. Well, since you said “marooned” and not “in a dire fight for survival,” I’m going to stick to a book that will help keep myself from going insane. I think it would be a toss up between George RR Martin’s Song of Ice and Fire or Wheel of Time by Robert Jordan. I started the Song of Ice and Fire and quit in book 2, disgusted by the deaths and that I’d just read 100 pages that covered ONE DAY in 8 character’s POVs. I need more movement than that in a book! BUT, I’ve watched Game of Thrones now and have survived character deaths enough to appreciate the story. So I’d love to try reading it again.

And I’ve simply always wanted to read Wheel of Time, but as I’ve gotten older I’ve become more and more adverse to starting a really big series. I used to LIVE for mega-series like all the books in Dungeons and Dragons Forgotten Realms. Now … I have a business, a family, I write whenever I can … allotting a lot of time to reading isn’t high on my list. So I’d need to be marooned on Mars to start something with that many books. Of course, all that said. If I could have a device with unlimited battery life and allowed typing… I could write my own epically huge series in peace and quiet. I think I’d actually prefer that! 😉

I would say there are probably a lot of books that would fall into this category, but the first one that came to mind is Song at Dawn by Jean Gill. I picked up this book, the first in her Historical Romance Troubadour Quartet in an organized swap on Goodreads. I like history, but not so much romance so was a little worried (but the pickings were slim). OMG, I loved it. Loved it so much that I’ve become a beta reader for Jean as each book came out and get ARCs and !?!!! I’m desperately waiting for the last book to be written and released, which might not be until 2018. Accchhhh!

So yeah, pleasantly surprised to say the least. The time period is just different from anything I’d read covering the crusades but based in France, even though it does range as far as Jerusalem. The characters are fantastic. Jean’s treatment of historically ignored minorities is awesome. And the love that is central to the books is just beautifully riveting.

Ok, so Friends of my Enemy is a series, but it is the favorite thing I’ve written. If I go to find a quote or excerpt for something, I find myself actually reading the book half an hour later. It is so embarrassing. 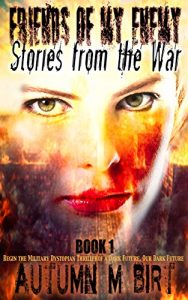 What is funny is the books, which are near future apocalyptic, are sort of my bastard children. Compared to my epic fantasy, they barely sell. They have a handful of devoted fans and good reviews, but no one really picks them up. And I’ve tried and tried and basically just given up and love them myself. I wrote them for myself because the characters were just awesome and took me to places I didn’t think I could write and they wouldn’t leave me alone. Seriously, I wrote all four books in less than a year. It just happened with passion and love and is the best writing I’ve done and really stretched what I thought I was capable of, the best characters I’ve come up with. As soon as I finish the trilogy I’m writing now, I’m going to read it again (and maybe take it with me to Mars).

The book that changed my life was a short story by Anne McCaffery on dragon impression on Pern. I don’t even remember the name, but it was tucked in a book of short stories in my Junior High School library. It was the first fantasy short story I’d ever read. Or at least one that felt real. Everything else had been childish All the Pretty Little Horses or Puff the Magic Dragon type stories. Dragon impression and dragons in general on Pern is serious, adult, and well thought out.

I was hooked on fantasy from that moment on, reading all the Pern books and then falling in love with Mercedes Lackey’s Herald Mages of Valdemar. And I know those books hugely influenced my life too. Women were heroes, powerful, and driven. And that was okay (I came from a very nice but very conservative, sort-of anti-women’s lib family, though my brother had me convinced I was adopted. Considering my adult personality, I do wonder some days!). The treatment of people who were different such as foreigners, gays, different race as … well, equally intelligent and beautiful people shaped my perspective of how life should be before I even realized it wasn’t how it is.

And, funny enough, they are both women fantasy authors. Huh. Funny how that all worked out!

I would say hand’s down the 7 Habits of Highly Effective People by Steven Covey. I read it as part of an advanced leadership course I took during my previous full time job. It changed how I managed my time and how I balanced what I thought was important and needed to get done NOW with things I wanted to do. Which helped me find time for writing and other things! I’ve found ideas from it sticking in my head years later, helping me create characters as well as manage my time and reduce stress. If anything, I should probably reread it as I’m sure I’ll find new tips to take away as an entrepreneur managing my own business now. 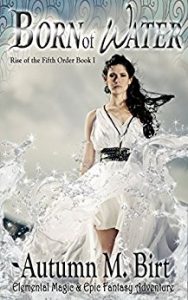 Born of Water is the first book of my first epic fantasy trilogy, the Rise of the Fifth Order and is definitely the book to pick up to check out my writing. It is free and rather popular, having hit #1 in epic fantasy and adventure fantasy a couple of times now. I might love Friends of my Enemy the best, but my epic fantasy series is far more popular with fans! 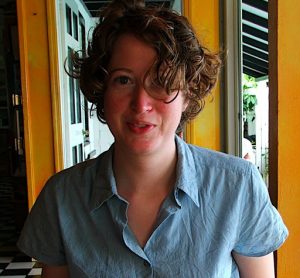 Autumn is a best selling author in fantasy, epic fantasy, and war – not all on the same series though! She is the author of the epic fantasy, adventure trilogy on elemental magic, the Rise of the Fifth Order. Her newest series is Friends of my Enemy, a military dystopian/ dark fantasy tale laced with romance. Friends of my Enemy was released in full in 2015 and is quite the story full of strong characters, tight plots, and lots of action. Meanwhile, she is working on a new epic fantasy trilogy, Games of Fire, set in the same world as the Rise of the Fifth Order. The first book was released in March of 2016. If she stops goofing off and enjoying hobbies such as hiking, motorcycling, and kayaking, she may even be able to release the second book soon too.

You can find Autumn at: www.autumnbooks.co