One of the common themes I’m finding in these interviews, is that writers of horror and dark fiction seem to be uncommonly nice. Possibly unexpected given some of the toe-curling, skin-clawing fiction they write.

(It also makes me wonder if authors of happily-ever-after, ‘blue-rinse’ romance novels are secretly horrible and twisted?)

This weeks horror author is the exception to the rule.

(And she’s a musician, so she gets bonus points.)

Good people of the Internet, writing out of Shropshire, England – Pippa Bailey

The book I would recommend would be the first adult horror book I was ever given. Cabal by Clive Barker. The copy I had was handed down from my dad. I’d spent years as a kid staring at the covers of his sci-fi, and horror books on his shelves, and it was one I was desperate to read. I wasn’t disappointed. It opened my eyes to a world of possibilities, which was a lot for a seven-year-old girl. It forced me to face concepts, that at the time, I was too young to comprehend. It was certainly my first introduction to anything of a sexual nature. A far more enthralling idea of a love beyond death, than that which most young girls are exposed to, Romeo and Juliet. Cabal kept me completely enthralled with Barkers use of skillful prose, and writing, at a level of which I had not yet been exposed to.

Don’t laugh, but I’d take Harry Potter and The Prisoner of Azkaban. If I was to be marooned on Mars I would be looking for comfort. Azkaban is a book that helped me survive a childhood of bullying. I would often escape into my own imagination in my early teens with the Harry Potter series. Although, I know not everyone is a fan, and it is a drastic departure from my regular theme of horror books. Rowling has a way of taking you away from the pain and angst of your real life. She smothers you in a world of fantasy and adventure, with a group of ramshackle characters that leave you feeling loved while you read. I could never feel alone with a Harry Potter book.

That would be a sci-fi horror book called Nascent Decay, by Charles Hash. We met through a review company I run called the Ghoul Guides. I was sent a copy of his debut novel for review. It was the first full novel I read on my e-reader, as I much prefer paperback. I was completely swept away by his world building. The concept for his first book, and subsequent titles in the series is utterly brilliant. It almost feels like it belongs in the Star Wars universe. There are a great number of twists, where you feel you can predict the direction of the story, and then he completely shocks you with a new level of horror. One of my favourite reads of 2017.

My favourite of my own stories is a supernatural horror called In for A Shock and has just been released. It was written for a charity anthology called Sparks: An Electric Anthology

. I’m incredibly excited about this story, and the electrical concepts. IFAS tells the story of Hannah, a woman in her early 20’s who lives alone, and like most people she abuses electricity. Eventually electricity wants to take back the power she has wasted. It gets electrifying and a little gory along the way.

Strangely, my biggest influence would be the musician David Bowie. Other than being an author, I’m a classically trained composer and vocalist. Around the time I discovered my love of horror, I was introduced to Bowie via a terrible TV show called Stars in Their Eyes, where a member of the public impersonates a singer and they compete to be the best. So there I was, 7 years old, watching Saturday night TV featuring a Bowie impersonator singing Star Man, and I fell in love. Possibly my first love. I spent the best part of my childhood sat on my bedroom floor surrounded by Goosebumps and Shivers books, listening to The Rise and Fall of Ziggy Stardust and the Spiders from Mars, and Let’s Dance on tape. There was something about Bowie that brought out my imaginative side. He inspired me personally, and my future degree in music. I was an awkward teenager who didn’t really fit in too well at school. I was out-there regarding abstract thought, and not interested in most things other teenagers were. I’d put on my Walkman and my tapes (and eventually cds), and I’d feel a bit more complete. I think being influenced by such an extreme character at a young age helped me to become the person I am today, and to be more accepting of people being their own crazy selves. I was devastated when he died in 2016. I’d put off writing him a letter for about 10 years. I wanted to thank him for being that spark of inspiration for me in childhood, one that hasn’t faded. I never did write that letter.

As a writer, my biggest professional influence and support has been fellow author Mark Cassell. I have been lucky enough to have been mentored by him over the last few months. Learning from someone who has spent years studying the craft has been an eye opener. It gave me the confidence to be honest with myself about the areas of writing that I do struggle with. I have been introduced to a plethora of writing support books, and courses. Which, without Mark pushing me in the right direction to learn more, I may never have encountered. I would say my writing has dramatically improved as I have taken the time to learn. I think too many people are unwilling to take a step back and assess their writing skills, scared that it’s a step away from where they want to be on their career path. Without Mark’s support, I wouldn’t be where I am today, nor would I have the confidence to continue on my writer’s journey.

You can find my short stories in several books released in 2016 and 2017 from Gruesome Grotesques, to The Reverend Burdizzo’s Hymn Book

, which can be found on Amazon. The one to keep an eye out for is my debut novel LUX which will be released in summer 2018.

You can find Pippa on her FB page. 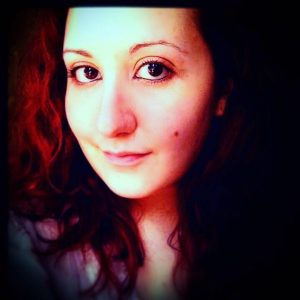 Pippa Bailey lives in rural Shropshire, England. Principally a horror writer, independent reviewer, and YouTube personality, her supernatural, and sci-fi stories have featured in several anthologies, and zines. Her debut novel LUX is due for release summer 2018