In association with Confessions of  a Reviewer, I’m very happy to be able to bring you another interview/ review post-pairing. (Is that even a word?)

You can find out what I thought of Author 39’s most recent book tomorrow, but today, here’s a taste of her favourite books.

Good people of the Internet, writing out of Colorado Springs – Christina Bergling

Seven Types of Ambiguity by Elliot Perlman. The multiple narrations in this book blew me away. All seven circle around a central event to become a brilliant examination of perspective and distortion. It is one thing to understand that everyone sees things differently, it is more impactful to experience that seven times.

Different Seasons by Stephen King. “The Shawshank Redemption” is one of my favorite novellas ever. It is simply intoxicating. Yet all four novellas in the collection contain an entire and fascinating world. If I was stuck reading the same book over and over, I would want one with multiple stories.

. Savages was the world I could keep living in. When I was writing, I thought about it all day, dreamed about it. The story just poured out of me. However, The Rest Will Come was the most fun to write. I was able to include people in my real life in the process.

Imperial Life in the Emerald City by Rajiv Chandrasekaran. I went to Iraq as a contractor in 2009, and nothing there made sense to me. This book explained some of the irrational and upsetting paradigms and procedures I encountered. It did not make the things acceptable, but it at least established cause and effect.

Gerald’s Game by Stephen King. I read a lot of Stephen King’s work in my youth; however, this is my favorite novel of his. This book taught me about crafting horror in a restricted setting with very few characters, showing me the horror in the mind. I found that restrained horror far more terrifying than his more fantastical works.

The Rest Will Come

offers a good taste of horror with some levity. It is available on Amazon and through other online book retailers.

You can find Christina here. 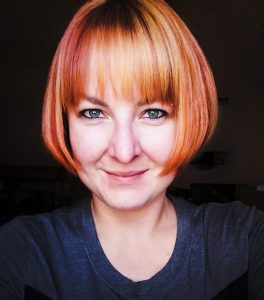 Colorado‐bred writer, Christina Bergling knew she wanted to be an author in fourth grade.

In college, she pursued a professional writing degree and started publishing small scale. It all began with “How to Kill Yourself Slowly.”

With the realities of paying bills, she started working as a technical writer and document manager, traveling to Iraq as a contractor and eventually becoming a trainer and software developer.

She avidly hosted multiple blogs on Iraq, bipolar, pregnancy, running. She continues to write on Fiery Pen: The Horror Writing of Christina Bergling and Z0mbie Turtle.

Bergling is a mother of two young children and lives with her family in Colorado Springs. She spends her non‐writing time running, doing yoga and barre, belly dancing, taking pictures, traveling, and sucking all the marrow out of life.