The One Book Interview train rumbles relentlessly on, and this week we have . . .

A speculative fiction author of science fiction, fantasy and horror.

A lover of dystopian, Orwell, weird sci fi and the occult.

An artist and author.

Good people of the Internet, writing out of somewhere in the US (I have no idea where!) – Brian Barr

Otherland by Tad Williams. I am a writer who loves to mix genre and I love epic writing as well. Tad’s Otherland mixes genre on an expert level- it’s a science-fiction book, but there are fantasy elements, and fantastic world building. The characterization is believable and intriguing. His chapter cliffhangers are exciting, and each chapter just makes you want to read more. His series wrapped up perfectly and it seemed he took the time to comb through his series as expertly as possible, to tie up all ends and make such a complex story complete.

Aristoi by Walter Jon Williams. It’s a great space opera and probably the first sci-fi novel I read. I’d have to read something science-fiction based while leaving the planet.

A Clockwork Orange. I found it in my uncle’s old room at my grandparent’s house when I was about 15 or so. It became one of my favorite books. Just the way Anthony Burgess plays with language is incredible.

That would be a mix between Serpent King: Shadow and Light

, which is my latest novel, and Carolina Daemonic Book II: Rebel Hell, which is currently being edited by Leza Cantoral. Serpent King was my chance to play with science-fantasy and tell an epic tale in a standalone novel that may or may not have future books to follow it. Book II: Rebel Hell is the second book of my Carolina Daemonic series, and hits on a lot of dark themes with the world building already established from the first book, so I’m able to dive into a lot of action and wild scenes in the second book while continuing a through, complex story with difficult politics.

Wow. That’s a hard one. Maybe The Brothers Karamazov by Dostoyevsky because it looked at a variety of personalities and gave a deep analysis of where all the characters were coming from, why they thought the way they did, why they chose certain actions. That book helped me understand that everyone’s different, and what may work for one person may not work for another.

So many books. I think the main book that hit on the what I wanted to write was The Great and Secret Show by Clive Barker, which I read in high school. I knew I liked horror, and although I hadn’t gotten heavy into epic fantasy, I knew I liked fantasy. Clive Barker was the first author who showed me the main way I like to write- horror and dark fiction mixed with fantasy and occult themes, with a flair for philosophical probing and interest in art, the act of creating itself. Clive just seemed like a natural influence on me. I grew up with Stephen King in the house, and though I love King, it was Clive who showed me horror that was “my” horror.

I have three novels out, and a variety of short stories out at the moment. I would like people to read my latest novel, Serpent King: Shadow and Light

, to get familiar with my genre mixing, characterization, and world-building. You can get it on Amazon.

Then, I would ask that people check out Carolina Daemonic: Confederate Shadows

, which was my debut novel and the first of my Carolina Daemonic series. This book tackles heavy social and political issues. It has a prosier start than my following novels; I like that about it, since I had to discuss and cover a lot of ground to build a dystopian world that is not that different from our own. As an Orwell fan and a lover of alternative timelines, I was drawn towards making my own dystopian fiction. Carolina Daemonic mixes steampunk, the occult, and weird science in an urban horror-fantasy hybrid. Like Serpent-King, it’s multigenre. I also have a lot of short stories in this series as well.

You can find Brian at: www.brianbarrbooks.com 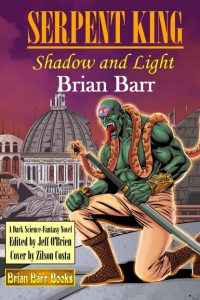 Sunlight hits the tapestry of ovular golden designs stretched across the outside of opulent dome-shaped ruins on my home world, possessed by Reptilian poltergeists. I revisit this planet often, the cradle of my origins, and the remaining puzzle piece of the people responsible for half of my ancestry. I am reckless and ashamed inside whenever I sojourn to this wretched ball, so I mustn’t stay long. If I do, then I’ll smash down more walls, cause damage to a few more palaces, and continue to endanger the preservation of this place’s essential yet painful history.

My tortured, tragic beginnings were composed upon Naga, the planet’s interlaced lands and oceans ruled by the greatest civilization of the Draco constellation. My Reptilian people taught me how to hunt, strike, and kill. They showed me how to conquer. In return, I killed them all. Vengeance was the reason behind their demise, for they did more to me and my parents than they did for us, but I often wonder if the annihilation of my people was truly worth it.

Possibly not, if the visions of my mother and father are to be trusted. Their ghosts seem to be lost within the ghostly soup of this possessed planet, contaminated with the shared suffering and agony of serpentine spirits trapped on the once grand world of Naga. My vengeance was in their honor more than my own. If they are truly underworld slaves here, then this planet has every right to shame me.

Truly, I am the greatest subjugator ever spawned from the Reptilians. Naga should be a trophy on my cosmic mantelpiece, a triumphant reminder of my first success as a solitary conquistador. Instead, it is a contaminated burden, adulterated with memories that, akin to the birth world in my collection, I can never let go of, ultimately. My blood and past will always bond me to Naga, for I am Zian Axakil Din’amu Ur, born a commander general’s son, reborn as the Serpent King

Cosmic colonialism, extremist planetary nationalism, and alien genocide are abound in the Dracos Constellation, where the Reptilians rule without mercy. Enter Serpent King, a dark occult science-fantasy novel following the origins of Zian Ur, the last of the Nagans and a cosmic conquistador with a unique destiny.