Other than a love for reading (and a bloody-minded persistence*), there isn’t a particular type of person that writes, no easy pigeon hole for, or set of ingredients that go into making an author.

Author #46 is no different.

Describing himself as ‘a veteran observer of the world,’ #46 has competed internationally as a Muay Thai fighter, worked as a mental health nurse, and now works for a specialist unit for those with financial problems.

Good people of the Internet, writing out of Liverpool, UK – Frank Dorrian.

The most recent one that springs to mind would be Kings of the Wyld by Nicholas Eames. It’s an awesome book that I think will strike a note with fans of all branches of fantasy. It’s not overly complex story-wise, in fact I’d say its astoundingly simple, but it gives plenty of room for the characters to shine, which is where the book’s strengths lie.

Something fat. Like, p h a t. Probably something from the Malazan Book of the Fallen series, as I should probably read beyond the first book at some point.

I actually took three huge tomes with me to Thailand in 2015 when I was training for a fight there for a month – Queen of Fire by Anthony Ryan, The Shadow Throne by Django Wexler and The Liar’s Key by Mark Lawrence. I finished ‘em all in about three and a half weeks, fought, lost, and spent the rest of my free time nursing bruises and drinking cheap beer in 40 degree heat.

The Thousand Names by Django Wexler. I’m not into imperialist/colonialist era stuff, reminds me way too much of Sharpe-style stuff which I’m just not a fan of, but The Thousand Names was awesome. Very different book, and after reading about swords and shields and spears and bows for years on end, reading about muskets was actually pretty refreshing.

I would say my first book, The Shadow of the High King

More than likely The Hobbit, if I’m honest. It was the first real fantasy book I chose to read when I was about 12, way before The Lord of the Rings films were kicking about. I picked it up from the school library after my dad said I should read it and finished it in about 2 days, after that I picked up his old copies of The Lord of the Rings and fantasy just sort of became my thing, even if Tolkienesque fantasy no longer is.

Definitely Prince of Thorns by Mark Lawrence. It wasn’t my introduction to grimdark, but it was certainly my introduction to a poetic, philosophical form of grimy fantasy, one with emotional depth. It was enough to inspire me to start writing again after 10 years away from the keyboard.

I’m not sure how my readers’ opinions would fall upon this, but personally I’d actually say my most recent book, Scars of the Sand

. It’s book 2 of my series of shorter standalones, Tales of the Blackshield Dogs, and something of a prelude to the central story arc in The Shadow of the High King.

You can find Frank at www.frankdorrian.wordpress.com 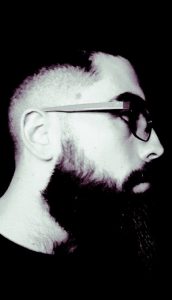 Frank Dorrian was born in 1987 in Liverpool – his hometown, a post-industrial cityscape, served as poignant inspiration for his creative efforts. He would commence writing in earnest during his teenage years, composing stories to sate desires of both expression and introspection.

When not writing, Frank spends his spare time reading, playing computer games and attending a martial arts gym. He has previously competed as a fighter domestically in the UK and abroad in Thailand.