‘Writing fiction is the best therapy in the world.’

This is the professional’s opinion.

A man who has worked with psychopaths and their victims in prison and private practice.

A man who has been publishing articles and books on psychology and related subjects for over twenty-five years.

And, more importantly, a man who named John’s Wyndham’s Day of the Triffids as one of his book choices. For which, I almost vetoed his interview.

Why? I have an irrational fear of sunflowers, which I can only explain by watching that film at an early age.

(Considerate ‘friends’ have sent me postcards of sunflowers with ‘we’re watching you‘ and ‘we know where you live‘ written on the back.)

Good people of the Internet, writing out of Marree in Southern Australia – Leo Nix

I’ve read thousands of books since I was a kid but there is one that does stand out above the rest: Bryce Courtenay’s The Power of One. A story set in South Africa during the 1930’s and 40’s during those terrible apartheid years. It’s about a small boy raised by his single mother but spends most of his time with an elderly neighbour who teaches him how to live. He meets up with a native boxing trainer in the prisons and learns to box. Boxing is his entry into manhood and makes for a good backdrop to the various racial and social tensions in the country. It’s strongly character driven set against the violent background of those torrid years in South Africa’s history.

Well, I guess I’ll have plenty of time to catch up on my reading. If I was to take a book to enjoy I’d take Shike a two volume series by Robert Shea. Robert Shea writes the story of a young Zen monk, a Zinja, and the struggles he is put through by his religious order to escort a young princess across the country. It is a rites-of-passage adventure, some lovely martial arts and swordplay which illustrates Japan of the samurai era. It has powerful characters and a story backdrop of intrigue and violence, loyalty, love and honour. I’ve read the series quite a few times over the years and can easily pick it up and enjoy it all over again.

Chris Harris’ UK Dark Series – UKD1. A post-apocalypse series set in the UK. I fell in love with post-apocalypse books after I read John Wyndham’s The Day of The Triffids at school a long time ago. Since then I’ve been hooked on post-apocalypse stories. Chris’s writing style is easy to read and his stories simple, uncomplicated and highly plausible. I haven’t read all his books, I’ve only just finished book 1, but I’m looking forward to reading the rest.

I write both non-fiction and fiction. I found that my writer’s ‘voice’ has changed since I started writing fiction. Now that I’m about to start writing another non-fiction book on psychotherapy for PTSD and anxiety, I’m actually looking forward to see how I write in the more formal format of a self help genre.

But to get to your question, the third book in my series, Sundown Apocalypse 3: Homeland Defense

, I thought was slightly more aggressive and emotionally hard hitting than the first two. Homeland Defense sees one of my female protagonists run a mission into the middle of the terrorist township of Mount Isa, northern Queensland, Australia. She’s a tough girl but the events of book 3 lead to some PTSD of her own in book 4 which comes out on the 2nd July.

The Red Chief by Ion Idriess, the true story of an Australian aboriginal chief passed down from generation to generation. It was recorded almost word for word from the last surviving full-blooded member of the Gunnedah tribe in the early 1950’s. A story of a young man who reaches warriorhood amid the greed and vindictiveness of his tribal leaders. Beautifully written by Ion L. Idriess, a prospector and bushman who write fifty odd books on Australian aborigines early last century. If anyone wants to learn how the Australian aborigines lived and loved before white settlement, this is a book they should be reading.

As a professional author, Devon C Ford’s After It Happened post-apocalypse series. A friend suggested I have a look at his books and I fell in love with the series. By the time I’d read book 3 I was convinced I had to write my own post-apocalypse books. I look for strong character-driven novels with challenging settings which push the characters to face up to and overcome adversity, Devon’s books have that.

. It’s available on Amazon. Set in the harsh, central Australian deserts, the ‘red centre’. I like to spend time working on character development, pushing them through hell and back again to illuminate their growth as valuable members of their community. As a psychologist this is what challenges me most, to demonstrate how individuals can change and grow despite the horrors of a violent, psychopathic environment. Despite the difficulties they face they can still find time for love and deep friendships. If you like Australia and deserts wrapped into a post-apocalypse setting, this is for you.

You can find Leo at: www.leo-nix.com 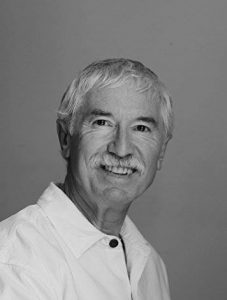 Leo Nix is a psychologist who has worked with psychopaths and their victims in the prison system and in private practice. Through his writing he endeavours to bring to life real people in their struggle for survival against extreme adversity. He has a wife who actually enjoys reading his books, three children and two delightful grand children, plus a cat with no tail called ‘Piggy’.