We’re up to Interview #31 and I have absolutely no idea how to introduce this week’s author.

Go read his bio at the bottom of this page or on his website.

See what I mean?

How do you introduce someone who can’t even introduce himself? (Hi, Dunk, you’re not really reading this are you?)

If, however, you’ve been too lazy to click on a few links, I’ll leave you with this, from the self-professed ‘loon’ himself.

“It’s taken me a long time in my life to pull my finger out and do something that I enjoy, to most people, myself included, work is a chore. Writing helps me get through that by giving me a shining beacon to keep me going. Whatever that beacon is in your life, follow it, embrace it and make the most of it. Life is too fucking short, don’t have regrets, just do it.”

Good people of the Internet, writing out of Chippenham, Wiltshire (UK)  – Duncan Bradshaw

There are a number of books that lay to the claim of ‘stone cold classics’, and I agree with a number of them. Personally, I’d say that everyone has to read 1984 by George Orwell, without a shadow of a doubt. Yes, there are parts in the final third which feel a bit superfluous to the modern reader, but as a work of fiction, it is near peerless. With recent events, this, and a number of other dystopian books have been pimped out again, whilst they (Fahrenheit 451, Animal Farm, Handmaid’s Tale, A Brave New World etc) are excellent reads, 1984 surpasses them all.

I’d take House of Leaves by Mark Z. Danielewski with me. This would be a bit of a bold move on one main fundamental issue. I haven’t actually read it. I bought it a few years back following a recommendation by a friend. It has sat, nestled within my TBR pile since that fateful day. As other books have been picked up and devoured before it, still it looks out at me, hoping for the day when its turn will come. Being marooned on a distant planet, where time and the sheer size of this weighty tome are no longer considerations, I’d finally be able to read it. I just hope that I enjoy it, else it’s going to be a loooonnngggg time on the red planet.

Got to go with Ready Player One, by Ernest Cline. You know those books where you hear people go on about, even those who you don’t know that well, and you feel inclined to pick it up, just so you know what they’re banging on about? That was Ready Player One. I snagged it in Southcart Books, in Walsall, when I was doing a reading, with the intention of slinging it on the TBR pile, and getting to it at some point, (a la House of Leaves). I ended up starting it a few days later and was completely and utterly hooked. Not quite knowing what to expect, as I got more into it, I realised that this book is aimed squarely at me and my generation. So many references in there, so many favourite games and popular culture references, I loved it. I passed it to my brother who approached it with similar expectations, and he loved it too. It’s a winner. 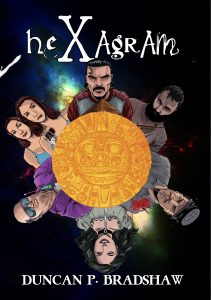 My personal favourite is, heXagram. It’s six stories, set across five hundred years of human history, charting the dissemination of an ancient Inca ritual. It is fundamentally an action/horror book, based on the adage ‘we are all made of stars’. What if it could be harvested? How can knowledge, partial or complete, be twisted to fit different people’s views or hopes? It tracks this information as different people come into contact with it, and seek to use it to their own ends, visiting the American Civil War, the Whitechapel murders, a suicide cult in the eighties, up until the modern day. For me, it was the most serious thing I’d written, using different styles to create a patchwork quilt of a narrative, all wrapped up in an epic overarching story. Sounds pretentious huh? It certainly isn’t and has definitely been my ‘marmite’ book, but to me, it is my absolute stonewall favourite.

When I was halfway through college, we moved 40 odd miles down the road, which meant that I had to get the train to study. This gave me vast parts of the day with time to kill. There is only so much bowling and arcade games that you could play, so I decided to work my way through my mum’s bookshelf. I ignored the Stephen King, and headed straight for the Russian literature, mainly Aleksandr Solzhenitsyn. One Day In The Life Of Ivan Denisovich stood out a mile. The struggles of getting through one day, alive, and somehow surviving, knowing that the next day would be the exact same situation all over again, gripped me. History has always interested me, but learning about things which governments tried to bury and suppress, trying to silence the victims and the survivors, left a profound effect on me. Though I later read the likes of Primo Levi, it was always One Day In The Life…that left an indelible mark.

I’ve never been a fan of authors giving tips on writing, it just seems a bit silly. What works for me, is anathema to someone else, and downright crazy for the next person. I think the book that gave me the confidence to write what I wanted was Vinyl Destination, by Adam Millard. If you’re not familiar with his work, you really are missing out. Vinyl Destination is a simple premise, but pushes the silliness envelope into overdrive. I was on holiday when I read it, and the amount of times I laughed out loud and got odd looks from people was high. When I finished it, I thought if he can do it, why can’t I? Not in the same way, that’s impossible, but it showed me that I shouldn’t be limited in my ambition. Most of my ideas are a little odd, and as I don’t plan what I write, even mundane scenes end up veering off into weird territory. This book took off my mental shackles, and allowed me to be the writer that I want to be, not what I think I should be, and that’s a helluva big deal. 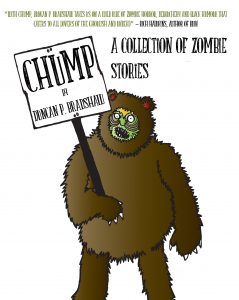 I’m mostly known for two things, zombies and silliness. This is encapsulated perfectly in my zombie short story collection, CHUMP. Nine stories on the undead, each one is very different from the others. There is one set in the Wild West, another gives an alternative reason as to why the Eastern Bloc boycotted the 1984 Olympics. There is even a story featuring zombie fish! In the midst of it all, is a novella length story, and a serious one at that, which follows a courier living in the apocalyptic wilds. It’s passe, but there really is something for everyone in it, even if you’re not that fond of zombies. It is a true mix of styles, and was even nominated for a Saboteur Award at the beginning of 2017. Which was nice.

You can find Duncan at: www.duncanpbradshaw.co.uk 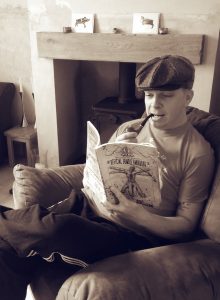 Give me a D! D. Give me a U! U. Give me an N! N. Okay, so this wasn’t the best idea was it? If you hadn’t guessed already, Duncan P. Bradshaw (spell out the letters in your head if you want), was a cheerleader in a previous life. Many was the day spent practicing his moves on windswept playing fields, and nursing twisted ankles after nasty spills on wooden gym floors. When he was murdered brutally by renowned serial killer, Ed Turpin, aka The Broom-handle Basher, he was reincarnated and, sometime later, the memories of his hideous demise came flooding back. Day and night he was wracked with visions of his final moments, and other things, other lives, other futures. GASP! So, to try and make sense of it all, he began to write them all down, hoping that he can bring enough words into existence that he might be able to form them into a broom-handle of his own, find Ed Turpin, and HAVE HIS REVENGE! Please help him, by reading his books, or by leaving out snacks on your porch. He mostly likes tea (milk, one sugar) and biscuits.