Interview #35 holds the record for the quickest turn around to date.

Within 12 hours of the author kindly agreeing to be featured on the One Book Interview, I had the answers back. I thought it only right to put out the interview within another 12 hours.

You should read it, it’s a good one.

Good people of the Internet, writing out of Scotland in the UK (well, it is at the moment…) – Kevin Kennedy.

Warrior Wolf Women of the Wasteland by Carlton Mellick III. I have probably read thirty or more books by Mellick. This was one of the first and the main reason I started to appreciate the Bizarro sub genre. There are so many great ideas in this book and Mellick’s style is a pleasure to read. It’s almost like having a bedtime story read to you when you were little, except the stories are absolutely mental, and often look at real issues in a very interesting way. I really enjoyed this one and while I could spend all day listing books like Swan Song and other fan faves, I feel this book deserves more credit than it gets.

Okay, so I said in the last post I wasn’t going to mention books like Swan Song. I lied. If you only had one book, which if we are honest, isn’t a plausible way to exist, it would need to be a pretty big book. Especially if you were going to re-read it, which is something I very rarely do. I think Swan Song and The Stand uncut version are the two longest books I’ve read. Although a lot of people may disagree, for me Swan Song was a far superior story and had a lot more going on in it. Post-apocalyptic fiction is one of my favourite sub-genres so there is a good chance I’d go with this one. It is definitely one of the best books I have ever read. It could be an idea to take something I haven’t read but if it turned out to be crap or written in a style I didn’t enjoy I’d be raging lol.

City Infernal by Edward Lee. I started reading adult horror books when I was fifteen. I fell in love with Richard Laymons work and I read my way through everything he had written. When I finished all his books I tried another few authors and wasn’t impressed and just stopped reading. A few years later I found the old Richard Laymon message board and was recommended another few books and authors. The first four I bought were City Infernal by Ed Lee, Offseason by Jack Ketchum, Live Girls by Ray Garton and The Rising by Brian Keene. The suggestions were excellent. I loved them all but the world that Ed Lee builds in City Infernal was something else. It was entirely different from the type of horror Laymon wrote, and while I loved his style I also enjoyed Ed Lee’s style. I think it’s a book everyone should read. A lot of people talk about Edward Lee’s extreme horror and I love that too but this book is a tremendous story and not as hardcore as a lot of his other stuff.

that I co-wrote with J.C. Michael. It’s the longest piece I’ve written by quite a bit and it’s also the most time I’ve invested in the one piece of work. We changed things several times along the way and it’s good to have someone to bounce ideas off of. I think we both found it pretty easy to work together which helped and by the end up I think we have a pretty great story. The feedback has been excellent from readers and authors alike. J.C. also wrote a short prequel to the novella in Collected Halloween Horror Shorts.

Darkness Tell Us by Richard Laymon. It’s the book that started me reading adult fiction. I read Point Horror books when I was young and then fell away from it. I hadn’t read in years, then we got told we had to write an essay for English class when I was fifteen. I left it to last minute and then grabbed this book for 10p at a jumble-sale just because it had a Ouija board on the cover. I then realized the book was about six hundred pages and I think I had three days to read it and write the paper. It should have been an almost impossible task but I think I read about three hundred pages the first night. It was absolutely riveting. The story totally sucked me in and I only put the book down because I needed to get a few hours sleep. After this I read Island and continued on from there.

Probably Funland by Laymon. I don’t want to make it all about Laymon but sometimes when I’m thinking of new ideas and I think about the type of story that I enjoy reading, I think of Funland, as I really like stuff involving carnivals, boardwalks or piers with rides and stalls and circus stuff. Something about the whole carnie vibe works well with horror. Funland was among my favourite Laymon books, and ever since reading it, I’ve always looked for stories in that vein. The most recent story I have written, Halloweenland, featured in my new Halloween antho, is about a special kind of traveling carnival that sets up on a pier, funnily enough. It is completely different from Funland in every way but I think it definitely influenced my taste in horror and that translates into the stories I write.

, is the only work I have out that isn’t part of an anthology but I do put together the Collected Horror Shorts series, which has received some amazing praise. I have stories in each of the anthos and we have a fantastic mix of upcoming indie authors and some of horror genres top sellers. You can now pick up Christmas

You can find Kevin at: www.kevinjkennedy.co.uk 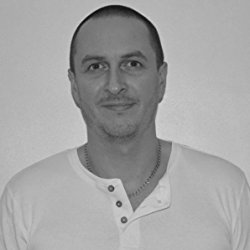 Kevin J Kennedy is the co-author of You Only Get One Shot, and the man behind the best-selling Collected Christmas Horror Shorts & Collected Easter Horror Shorts anthologies. His short stories have featured in many other notable anthologies in the horror genre.

Kevin lives in a small town in Scotland with his wife, step daughter and two strange little cats.