A former steelworker turned author who keeps beta-reading demons alongside his kids.

A huge thanks to Author 38 for his thorough answers to my questions.

(And The Stitcher-in-Chief crops up again in this interview. That’s three times: 20, 36 & now 38. Is there such a thing as stalking-by-proxy?)

Good people of the Internet, writing out of Sheffield, in the UK – Paul Flewitt

Well, I’m a horror (ish) author, so I guess I should start with horror right? So, my pick for this question is Stephen King’s The Bachman books.

I’m not really a big fan of Stephen King’s later work, but his early stuff is awesome. From Carrie, The Stand and It to The Talisman and The Shining, he really established and pushed the horror genre into the scene that we know today. The Bachman Books are a glimpse at some oddities, originally published under the Richard Bachman pseudonym. Roadwork, Rage, The Long Walk and The Running Man. The first story is nice, showing King’s ability to write a character that you can love and loathe in equal measure. The Running Man is the story that inspired the movie of the same name. As opening and closing stories in a short story collection, they do their job well, but these aren’t the reason for me picking this collection. No. The real meat of this collection is in Rage and The Long Walk. I consider these to be two of the very best Stephen King stories. There’s no bloat or unnecessary excess which usually typifies King’s work. These are straight to the point and hit you right where it hurts. The characters here are truly affecting, the stories more thought-provoking and challenging than almost anything else that King has written. Rage, in particular handles a very difficult theme (school shootings) with sweep, sympathy and I don’t feel that he glamourizes or sensationalizes the subject matter, as some other critics have done. The Long Walk is a tour de force of a story; a very prescient comment on reality TV shows and where they could end up. Sadly, King saw fit to withdraw Rage from the collection a few years ago, but if you can track down an older copy then you will not regret it.

I reckon that if you were marooned then you’re going to be waiting a while for rescue, so any book that you want with you would have to be pretty long. I reckon it would also have to be a book that you can read, read and read again without getting bored by it.

Before embarking on the journey that is answering these questions, I read a couple that have been done before. I didn’t really want to repeat something that someone else had said, because that’d be pretty damned boring. However, after reading Mark Cassell’s interview I couldn’t help but agree with him, and so I’m going to second his pick here.

Clive Barker is the best writer I have ever read, his imagination and grasp of language is second to none, without ever coming across as unnecessarily clever or hyper-intellectual. There, we’ve got that out of the way early and so I can just carry on gushing, right?

Imajica is a 1000 page + book which demands repeated reading. There’s a hell of a lot in here, from the history of the Godolphin family to the origins of our tortured and damaged hero, Gentle. It’s a story of love, obsession, sex, horror, greed and divinity. It’s a journey through our own world, into other plains and then flying off into the heavenly pantheon. He creates monsters the likes of which only Barker could conceive of, but he also creates beautiful creatures with the same abandon (Pie-oh-Pah, the Mystif.) He holds our hand through all of this journeying, whispering the tale into our ears as if he was sitting in the room with you. It’s a quality that I have very rarely experienced with any writer, and this is the book in which Clive Barker achieved a kind of perfection in his literary art.

It’s not often that I buy a book by a writer I’ve never heard of. Usually I have to have them recommended to me, or read a review about them. I took a chance on Alex Laybourne’s Diaries of the Damned because the style of the work was different and interesting. In its original form, The Diaries were a series of short works which centered on one particular character caught up in a zombie apocalypse. Nothing too new there, it’s a trope that is often used these days. The thing is that Laybourne’s DID do something a little different. He pushed the limits of what some might find acceptable, created a group of characters that you can immediately identify with, love, hate and sympathise with. Laybourne proved here that he understands human nature, people’s motivations and how to pull on the heartstrings. Laybourne was really writing dispatches here, reporting from the front line. A job very, very well done.

There are two that I’m particularly proud of, so I’m going to cheat and mention them both. Both are short stories, since I’ve spent the last few years writing for anthologies in an effort to hone my craft. Climbing Out appears in the Demonology

collection, and is a story that I’d wanted to write for a little while. It centers on a demon, climbing from the depths of Hell. On the climb, the demon reflects on what brought him so low. It’s a journey through ancient times and tells the story of misunderstanding, human error and the consequences of them… and redemption.

The second choice is The Silent Invader. I wrote this for an independent TV show named Fragments of Fear, which was being optioned at the time and can still be viewed on YouTube. I finished this one in 12 hours, it really just flowed out of me. It is a monologue from a possessing spirit, recounting its favourite atrocities in a very intimate manner. I really enjoyed the narrator’s telling of the tale, truly embodying the character and making the experience extra creepy. The resolve at the end is engaging, and just a little bit terrifying.

I don’t read true-drama books too often, but a title that kept on being mentioned to me was A Child Called It by Dave Pelzer. It’s the story of his childhood and is a painfully frank account of the life of an abused child. It really upset me and affected me deeply. One of those books that make you want to embrace your own kids and keep them safe, to be a better parent because you are aware that there are children in pain all over the world. These are the real horrors.

This is going to be a repeat, I’m afraid. It’s Imajica again.

I learn from everything that I read, and I’ve learned more from this book than any other. From characterization to world-building, it’s a tour de force of dark fantasy. This is the book that made me realise that my eyes had been closed, that there were more possibilities in the realms of horror/fantasy than I had imagined. This is where I understood what it was to let your imagination of the leash, to fly off into your own creation. I became a different kind of writer when I read that book, and it’s stood me in good stead. Essentially, to quote Barker himself; “I just had to trust my own madness.”

Probably the easiest thing to find would be my debut novella; Poor Jeffrey

. You can find it across the Amazons (currently available in paperback only, but will return to ebook soon.) and it really showcases my style well. It’s one of the first things I wrote that was readily accepted by a press, and I still love it. I think I captured the characters very well, particularly the main ones. It also got me my first favourable reviews, so it will always have a special place in my heart.

You can find Paul here. 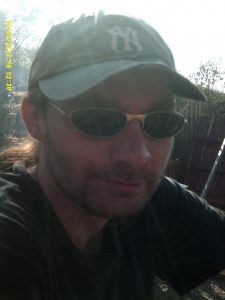 Paul Flewitt lives in Sheffield, UK with his partner and their two children. He is a writer of horror and dark fiction with CHBB/Vamptasy press.  Paul is the author of “Smoke” a flash fiction which appeared in OzHorrorCon’s Book of Tribes anthology, “Paradise Park” from JEA’s All That Remains anthology and the stand alone novella “Poor Jeffrey” through CHBB/Vamptasy press. In 2014, Poor Jeffrey was nominated in the Preditors and Editors Readers Poll for Best Horror Novel, placing 5th overall. He continues to work on further pieces…