This week in the One Book Interview room (think a benign version of Room 101), we have a fellow Prague-based writer, the man behind the Devil’s Bible Trilogy.

The Devil’s Bible is a series of rollicking, rambunctious reads based on the Thirty Years War, which effortlessly blend fact, fiction & fantasy, (My ‘Always Add Alliteration’ App is on overdrive today 😉 ). The books have over 100 5-Star reviews on Amazon alone, and the latest addition to the series, The Proper Folk, is out this week.

Ladies & gentlemen, may I present the original ginipote himself – Mr Michael Bolan.

Animal Farm is a story about how some pigs take over a farm, ousting the human owners. It’s also a history of the Soviet revolution and subsequent state. It’s a dire warning about how power corrupts and how everyone plays a role in the creation of a tyrant. When I watch a kids’ cartoon movie, I’m always amazed by the different levels of resonance embedded within it – there’s something for young kids, older kids, teenagers, adults. Animal Farm is the same – you can come back to it again and again, discovering more layers of insight and thought.

At the ripe of old age of sixteen, I stumbled on a copy of the definitive work on Irish Mythology, Gods & Fighting Men by Lady Augusta Gregory. In our school library, of all places! Seeing as no-one had ever checked the book out to read, the librarian asked if I would like to keep it, which I very gratefully did. This age-beiged hardback tome was published in November 1926, and I have now read it countless times. Screw Tolkien, screw Steinbeck, screw Orwell – I’m taking my frail copy of the tales of Fair Folk.

I was aware of Lorna Doone being read in school. But, even as a voracious reader, I shied away. I mean, it’s called Lorna. Lorna was a frumpy girl in my school – I think she was a frumpy girl in everyone’s school. So it didn’t excite. But when I moved to Prague in the mid-90s, my choice of books was limited. I could spend a fortune to buy an imported paperback: for the same money I could buy a few dozen beers. Yes, that’s right, a few dozen. But for the price of three beers, I could buy a Penguin Popular Classic. So I did. I bought all that I could find, and spent two years doing what I should have done in school, I read all the classics. And Lorna Doone wasn’t what I thought it was. Yes, it’s a “soppy romance”, but it’s a soppy romance full of sword fights, lost heirs, battles, betrayal, kidnapping and rebellion. Awesome.

Hidden Elements was the answer to a problem that had been bothering me for some months. You see, I just started writing the Devil’s Bible Series – I had no plan, no concrete objectives, no idea what a book should be. When I had reached 140K words, I thought I would check how long a book should be, and immediately my book became three. The problem was, 1645 and 1648 had lots of battles – there’s Books I and III sorted. But what about 1646 and 1647? Lots of diplomacy, a few skirmishes, but nothing too exciting. So I had to fill in the blanks, which became the Sons of Brabant besieging city after city, and the Fianna sent to the ends of the Earth on a series of quests. Somehow, from nothing, it became my favourite.

I have a gazillion favourite books, for different reasons, but the most important book for me isn’t viewed as a classic, except to a very small niche. I was a precocious reader, devouring Lord of the Rings, etc. as a young child. And then I went through the most middle-class teenage rebellion in history – I stopped reading – I think just to annoy my parents. From a handful of books a week to nothing, I simply didn’t read anymore. After a year, my mother made me a deal – any book I wanted to read, she would buy. I was in the local bookstore and saw Raymond Feist’s Magician. After admiring the cover art, and reading the blurb on the back, I asked if she would buy it. She did, I read it, and the rest is history. I recently read the final book of the series that Feist set in that world, thirty years after setting out on that journey.

This is a hard one to answer, so I’ll go for the Bible. If you consider the Bible to be a collection of books, then the Revelation of John, although Daniel, Matthew and a few others also dabble in eschatology – the End Times, which is what fascinates me. The apocryphal Book of Enoch covers a lot of ideas that aren’t mentioned in detail elsewhere – the Watchers, the Nephilim, etc. I spent many a Sunday morning reading these ideas rather than paying attention to whatever the minister was saying in Church. Sorry, Reverend Birney! 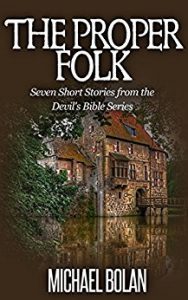 My new book, The Proper Folk, is a collection of seven short stories, so it’s not perhaps as challenging as a three-book series. I also love the basic concept of the stories – they’re snapshots (had cameras existed) of how ordinary people were affected by the brutality of the time period in which the Devil’s Bible is set. Kings and queens have cameo roles at best in these tales, where bakers, farmers and book-keepers hold sway.

You can find Michael at: www.michaelbolan.org 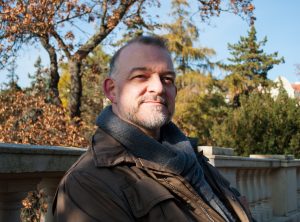 It took Michael Bolan over two decades of running in the corporate ratrace to realise that all he actually did was tell stories.

There was no Damascene revelation for Bolan which caused him to pen his first work of fiction, The Sons of Brabant. An avid reader, he simply felt that he could do as good a job as many of the authors he read and decided to put his money where his mouth was.

Living and working in many countries left him with smatterings of a dozen languages and their stories, and his love for history focused his ideas on the Thirty Years War, the most destructive conflict that the continent has ever seen.

Now living in Prague (for the second time), Michael brings alive the twisted alleys of the 17th century and recreates the brooding darkness of a fractured Europe, where no-one was entirely sure who was fighting whom.

Michael writes while liberally soused in gin, a testament to Franz de le Boë, who was mixing oil of juniper with neat spirit while the thirty Years War raged around him.