Following on from the review of The Rest Will Come earlier this week, here’s one of Turner by Karl Drinkwater.

Why two reviews in one week?

Purely because I can. 🙂

The One Book Interview will be back next week with, I hope, something special. 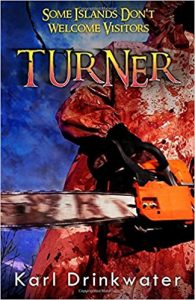 An isolated Welsh island seemed like the perfect escape for a convict on the run, a jilted woman, and a policeman seeking a quiet life. When the surly locals turn to murderous violence the three visitors are forced to flee together, trying to stay one step ahead of their increasingly insane pursuers.

The bad news keeps coming. There are too many to fight. There is no escape from the island. And the worst storm in years has just begun. They can only run and hide as they face a night of horror and madness. If they don’t work together then none of them will live to see the light of day.

This tense survival horror novel is a homage to decades of nasty villains, scary predicaments, and bloody books and films.

Turner is a good book which has the potential to be great.

The things that stood out for me:

The opening section was genuinely chilling – a great example of the main character’s environment being just slightly off at first and then building to a climax.

The prose is evocative – fantastic descriptions of the Welsh countryside.

The sentence structure is superb – a very clever use of long vs. short to build and ease tension.

The lighthouse scene was a classic case of one more chapter before I turn the light out (and skipping forwards a few chapters to get a sneak peak of what happens).

There are some clever twists and a few gruesome moments.

I love the cover!

There are a few things I wasn’t so keen on.

After the opening section, a few chapters were a little confusing in that there was too much jumping from one character/ place to another.

The main villain is bordering on cartoon-like. I would have preferred him to be more rounded. Similarly, I’d have liked some of the violence to be a bit more subtle. I have no problems with people writing about violence, but the truly scary stuff in the book was the anticipation of the terror and the moments when the author left me floundering in my own imagination.

A few sections made me feel I was being spoon fed info.

The use of Welsh for some of the characters conversations got in the way of the flow of the text. I like the idea of using Welsh to add to the flavour of the book, but I found it lessened the tension when I wanted things to be going quicker.

All in all, Turner is well worth a read, but I feel it could have been so much more harrowing in places.

Turner appears in this collection of all three of Karl’s books. I’ve also read Harvest Festival (review coming soon), which I highly recommend. 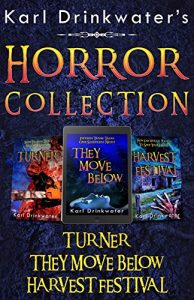 The collection is currently priced at 2.95 GBP, which is scandalously cheap for three books.

If you’re interested in reading the words behind the words, i.e. what Karl reads when he’s not writing, you can check out his interview below. (From a million years ago.)